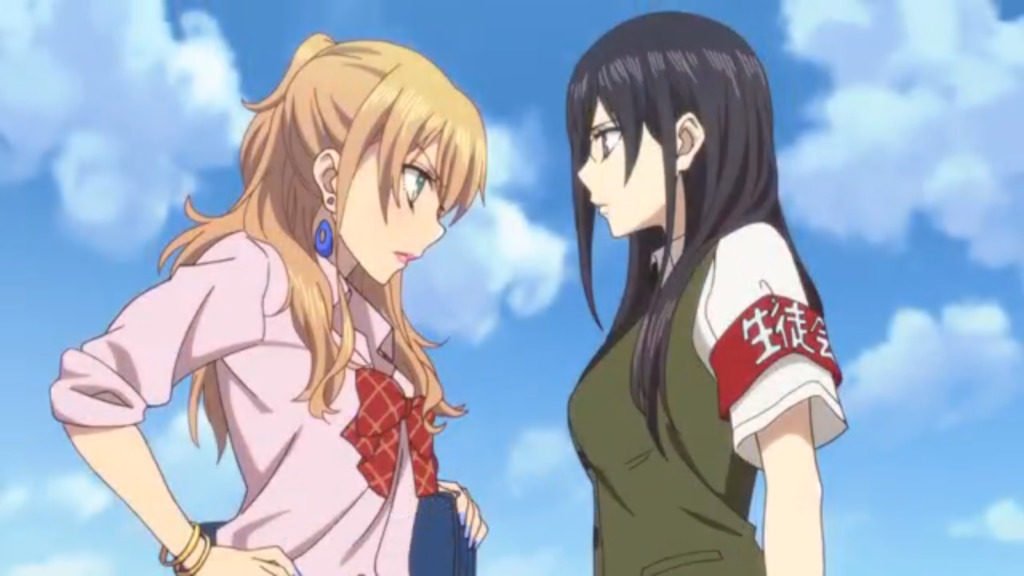 Citrus is a yuri romance manga that started in late 2012 and just recently ended. Although it looks like a second manga called Citrus Plus is planned. I don’t know if it’s going to follow the same characters nor have I read the manga. Early this year the studio Passione, also behind Rokka no Yuusha, aired a twelve episode adaptation to cover the first part of the story. So, let’s see how that went.

Aihara Yuzu finds her life turned topsy turvy when her mother suddenly remarries and the pair relocate, forcing her to enter a new school. Things turn awkward immediately when she unknowingly breaks the rules and finds herself afoul of the young student council president. She returns home for a surprise, she has a new step-sister and it’s the same student council president she met earlier, Aihara Mei. To make matters even more awkward, she finds Mei really attractive.

Let’s start with the problems with the series. There are two major ones. The first is that, like Love Stage, it doesn’t have a great first impression. I will say, to Citrus’s credit, it isn’t nearly as bad since the initial encounter between Yuzu & Mei involves a stolen kiss and not attempted rape but it’s still not a great way to begin a romance. The big one, however, is more reminiscent of the bad episode from Sasameki Koto. In that episode, we had a young girl act deplorably only to be instantly forgiven with no real consequences and her behaviour was never mentioned again.

Citrus has the same type of thing with a character named Matsuri except her actions are even worse and they span a couple episodes. She’s introduced about halfway into the series and decides to try and seduce Yuzu. But first she needs to deal with Mei, which is where the deplorableness comes in. Now, I’m not opposed to having an antagonistic character who’s absolutely atrocious as a person but the problem here, and in the aforementioned Sasameki Koto, is that they try to treat the characters as sympathetic. And that doesn’t work when you have characters act this horribly. Not without a lot of time and effort put into redeeming them. Which neither series does. Their plots end and they basically say they’re sorry and get told not to do it again and that’s it.

Moving on to the positives, I’ll give Citrus credit for having romantic content between siblings in a way that’s only mildly sleazy, and that’s entirely based on the stolen kisses early on. Because it makes sense for two high school kids who are suddenly tossed together as step-siblings to still be attracted to one another. The series also does feature some strong scenes. Some of them are quite funny, and usually involve Yuzu making an ass of herself. While others have a bit of an awkward tension betwixt Mei & Yuzu with enough positivity to make them kind of sweet little moments. The best part, by far, is the whole arc with the twin sisters, Sara & Nina. Those three episodes are where the series gets elevated to fantastic. It’s funny because it goes from the low point of the series, with Matsuri the sociopath, to the high point with the twins and it’s kind of hard to believe these were written by the same person.

I’ve already covered the basics of what’s wrong with Matsuri’s character and the handling thereof. Needless to say, she’s the worst character in the series by a wide margin. As for the other characters, there are aspects of Yuzu, Mei and their budding relationship I really like. The awkwardness has verisimilitude. Yuzu’s conflicting feelings of wanting to be a good sister but also being greatly attracted to her new step-sister is compelling. Mei’s desire to be needed and her drive for exceptionalism versus her uncertainty over how to proceed is also good stuff. But then there’s the way things are initiated betwixt them and the way it gives a poor first impression. Harumi is a fun character. Sara is a sweetheart. I also really like what little we get of Mei’s relationship with her wandering father. So, quite a strong cast with one very notable exception.

Here’s one area where I have to give Passione a lot of credit, their artwork is really great. The characters are well drawn. The backgrounds and various world objects look good. The animation flows smoothly. It is a good looking series.

Our main heroines are voiced by Taketatsu Ayana & Tsuda Minami, two strong actresses who deliver fantastic performances. We’ve also got Kubo Yurika, Kanemoto Hisako, Fuji Yukiyo, Matsuzaki Rei and some others who are really good at what they do. Even Izawa Shiori, voice of the worst part of the series, doesn’t perform badly. She just got stuck with a shit character. Takahashi Ryo put together a strong soundtrack for the series.

In addition to the obvious budding relationship betwixt Yuzu & Mei, Mei’s childhood friend blatantly has feelings for her. Yuzu has some kind of flirtatious moments with Harumi but a lot of that is Harumi teasing Yuzu after seeing her yuri manga. Sara’s whole arc revolves around her developing a crush on Mei who she refers to as “her destiny.” In short, this is one of those series where the only important straight character seems to be Yuzu’s mum. And I wouldn’t exactly be surprised if the latter part of the manga introduces her female “friend” who seems to always visit while her husband’s away. Which he always is.

There are plenty of things to like about this series. The last arc especially. Unfortunately, it’s really weakened by those three episodes heavily featuring Matsuri & by having the relationship begin in a poor way. Would I watch a second series? Well, yes. This may well be like Sasameki Koto where the manga gets past the point that made up the seventh episode of the anime and it just stays consistently fantastic afterwards. In which case, the bad part’s out of the way. But, by the same token, this isn’t a good yuri series thus far. It manages to average out to being decent but there are plenty of better ones out there. I’ll give the first series a 6/10. If they do come out with a second one I’ll give it a go but I’m not really going to go out of my way to go through the manga or anything like that.