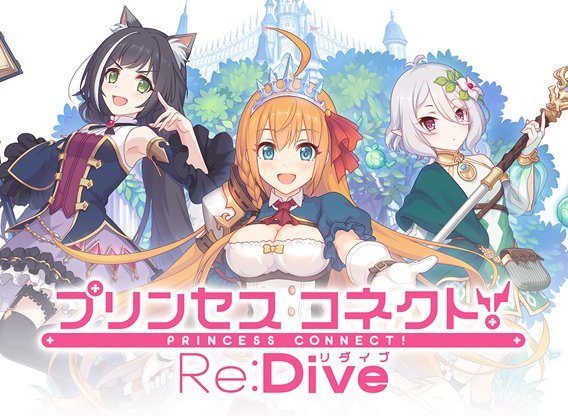 In anime industry, it’s pretty much a fact that most mobile game adaptations are either mediocre or to be more direct—bad, since they tend to be low-effort glorified advertisements of the game. There’re many reasons for this, such as the story format being too hard to adapt into a linear storyline due to gameplay elements mixed in, too many characters to introduce because most games use gacha system (a gambling-like roll-in feature that uses in-game currency, or preferably real money, to get the character you want among hundreds), or simply thanks to anime stuff being incompetent, etc. Let it be obscure games like Grimms Notes or President, It’s Time for Battle!, or even majorly popular games like Fate/Grand Order or Azur Lane, it’s fitting to say their anime counterparts are nothing more than a mere fragment of shadow of their game ancestors. Amidst such sea of disappointment adaptations, let’s take a look at Princess Connect! Re:Dive, another mobage adaptation from Spring 2020 season.

1. Introduction to the Franchise and Its Background

Princess Connect! Re:Dive is a remake game of “Princess Connect”, a web browser game by Cygames that closed in late 2015 due to issues. The original game can’t be accessed anymore and became a relic of the past but its current remake is considerably popular even before it gets an anime adaptation because of its engaging story, constant use of high-quality animated cutscenes, storytelling in anime formats like with OP & ED per chapter for main story and events, and most importantly, its vibrant, cute, and personality-unique heroines like any other waifu-collecting gacha games. Its popularity rose up a bit after its anime counterpart, which I’ll cover in following sections.

One sad news is, up to this day, the game is available only in Japanese and Chinese, and not localized in English yet so you can’t enjoy its full experience without understanding moonrunes. But there’re enough walkthroughs and guides on the internet to help you if you’re eager to embrace the challenge. The game being fully-voiced can also help you if you’re weeb enough a learner of Japanese in training.

If we talk about Spring 2020 season, every seasonal watcher knows that it’s a season of hiatuses and delays thanks to the global pandemic Covid-19. Anime industry wasn’t an exception to having difficulties during this emergency period. While many shows aired this season took delays and long hiatuses, Princess Connect! Re:Dive was one of the rare shows that successfully aired one episode per week for 1-cour (13 weeks straight).

Before talking about the contents of the show, I believe the person reading this article has already watched or at least heard about an anime called God’s Blessing on This Wonderful World! aka Konosuba. It’s a fantasy comedy show that’s fairly popular thanks to its wacky characters and over-the-top jokes.

Okay, Konosuba is great, but what does it have to do with Princess Connect! Re:Dive? Well, long story short, both shows have the same director, Kanasaki Takaomi. Because of this, even though both shows’ premises are only remotely similar (another-world fantasy), you can see uncanny similarities between them, most notably in characters’ reactions and beautiful CG splash effects when magic is involved.

“In the beautiful land of Astraea where a gentle breeze blows, a young man named Yuuki awakens with no memory of his past. There he encounters a guide who has sworn to care for him—Kokkoro, a lovely swordswoman who’s always feeling peckish—Pecorine, and a cat-eared sorceress with a prickly attitude—Karyl. Led by fate, these four come together to form the “Gourmet Guild.” And so their adventure begins…”

Above is the summary I directly copypasted from Crunchyroll. You might think it’s insufficient to guess the contents but sorry, it’s hard to tell the rest due to spoiler reasons.

Yes, despite its looks, Princess Connect! Re:Dive is story-focused… Well, at least in the game. In the anime, Princess Connect! Re:Dive having a story is only half-true because it tried its best to not adapt the main story of the game… Huh? Then what did it adapt? Hmm, let’s see… Characters… The fantasy-world setting… Welp, that’s about it. But it does have main story elements of the game in a ‘teasing’ form, meaning there’s almost zero explanation and they’re there for the sake of being there. They also adapted one plot-point of the game near the end, albeit very loosely. In other words, if you’re looking for the story the game has, the anime doesn’t have it. That leaves the question “What’s the appeal of it then?”

The “no story” part I mentioned above can either be a positive or a negative but let’s go as a negative for now. (Personally, I’m salty about not adapting the main story too, despite I understand the reasons.) That leaves to imagine what Princess Connect! Re:Dive is good about.

The very first advantage of Princess Connect! Re:Dive anime that you can easily notice is its detailed and fluid animation. I’m not gonna say it’s up-to-par with animation powerhouse studios like Ufotable or KyoAni, and other shows well-known for its animation quality like Demon Slayer or Fate series, but you don’t need a PhD to judge Princess Connect! Re:Dive‘s animation can stand up on its own. Plus its atmosphere of the vibrant and colourful world also serve as an eye-catching little show to leisurely spend your time on.

As a norm to waifu-collecting gacha games, Princess Connect! Re:Dive also has an all-you-can-choose free buffet of whooping 60+ girls to meet and interact, all with unique, distinct and unforgettable quirks. This is nothing amazing in gacha mobage industry at first glance but personally, I think Princess Connect! Re:Dive is a tad above in its heroines. In otaku term, I’d say these girls’ waifu-levels are over 9000!!!!!!

Don’t believe me, believe your eyes. Take a look at these cuties and decide for yourself.

Even then, there’re still some best girls missing in anime because it’s beyond me how can one introduce 60+ characters into a 13-episodes show and share them enough screentime without being overwhelmed. I guess this is one reason why the anime didn’t adapt the main story. Because in the game, its story is long enough to give most of the girls’ focus and even if it didn’t, each girl has their own character episodes.

Princess Connect! Re:Dive anime relies on its characters and its Slice-of-Life-style fluffy, comfy, and sometimes silly comedy. As usual with SoL shows, you won’t laugh out loud at its jokes but it’s enough to put a smile on your face. There will be some food-related scenes as its main theme but in essence, it’s not a cooking show but a light-hearted adventure with a sprinkle of some serious moments taken out from the game’s main story.

Don’t misunderstand because I kept mentioning good points so you might think the protagonist is also one. He’s not. At least in general opinion. He’s neutral to me but I do see why people might dislike him, or even hate him. Why? Let’s break him down a bit.

In the game, you can give MC-kun any name you want but in anime, he’s dubbed “Yuuki” for the purpose of an official and a canon name. Now let’s see why he might be disliked.

At the very beginning of the show and only 2 minutes in, he is mentioned he doesn’t have any memories prior to the event the anime has started. Yeah, amnesia is cliche in anime and it can be a good plot when it’s executed perfectly but in Yuuki’s case, his amnesia is a bit… extreme.

Not only his memories, but he also lost common sense and learning capabilities, reverting back to a toddler state. Him eating money (literally), and only speaking one word at a time like “Good!” or “Don’t mind!” is what you’ll see he’ll do the most. He does have one amazing buffing ability which is basically a plot device but he barely exists throughout the show that pissed off many anime-only viewers as the cheapest trick of a self-insert protagonist. I don’t have any intention to debate whether he’s a self-insert, or a good character but just to expect what you’re getting into.

I won’t go into details about the game because this article is supposed to be about the anime so just minor information in hope to attract some newcomers.

Princess Connect! Re:Dive‘s gameplay heavily relies on forming different parties that consist of 5 girls to overcome story stages. Each girl has her advantages and disadvantages according to her skills/spells and most importantly, positions that are divided into 3 roles, namely Frontline (Tank), Midline and Backline (Support/Healer).

Each girl has her ultimate called Union Burst that requires the player to touch the character icon to execute, which in turn encourages you to time it right because the rest of battles is auto. Shuffling characters throughout parties and trying out combos, also understanding your party and enemy’s strengths and weaknesses are the keys to achieve victory.

Like in every gacha games, the heroines are ranked by rarity and as a thumb-up rule, the rarer the girl, the stronger she is, generally. Some girls can be capped to highest rarity (6 Stars) but it’s not an easy feat.

Cygames, the developer of Princess Connect! Re:Dive and a powerhouse in Japanese mobile gaming who also created Granblue Fantasy and Shadowverse, doesn’t let slipping up the chance to make Princess Connect! Re:Dive more popular by collaborating with its siblings. The most notable examples are Djeeta, the playable female protagonist from Granblue Fantasy, is in the permanent pool of Princess Connect! Re:Dive along with Arisa and Luna from Shadowverse. You can also see other characters from Cygames-affiliated anime projects such as Manaria Friends, The iDOLM@STER Cinderella Girls, and most well-known dark isekai anime, Re:Zero – Starting Life in Another World in their respective events. This might also spark some interest in fans of collaborating franchises.

You don’t need to doubt that I’m an avid fan of Princess Connect! Re:Dive, who was playing the game even before the anime announcement. Otherwise, I won’t be writing this article. I might be biased in some parts but I tried my best to write the article from a neutral standpoint without bias and spoiler-free as possible. Even not counting my love for the title, I just can’t see Princess Connect! Re:Dive as a bad anime unlike other mobage adaptations (*cough* Azur Lane *cough*). While it has its fair share of cons and criticism, it’s still a very enjoyable show that can be watched standalone without the knowledge of the game. The show jumped from score 6.86 to 7.13 in just two days on MyAnimeList after finished airing, and you can see top 4 reviews gave 8 and above out of 10, if those prove my point.

So don’t let this underrated gem of a mobile game adaptation slip through your radar if you’re looking for Konosuba-like fun adventure comedy show, but cuter and wholesome.

Catch our interesting insights on all the action that is taking place in Anime and Gaming. You can only miss ’em if the devil 😈 distracts you.