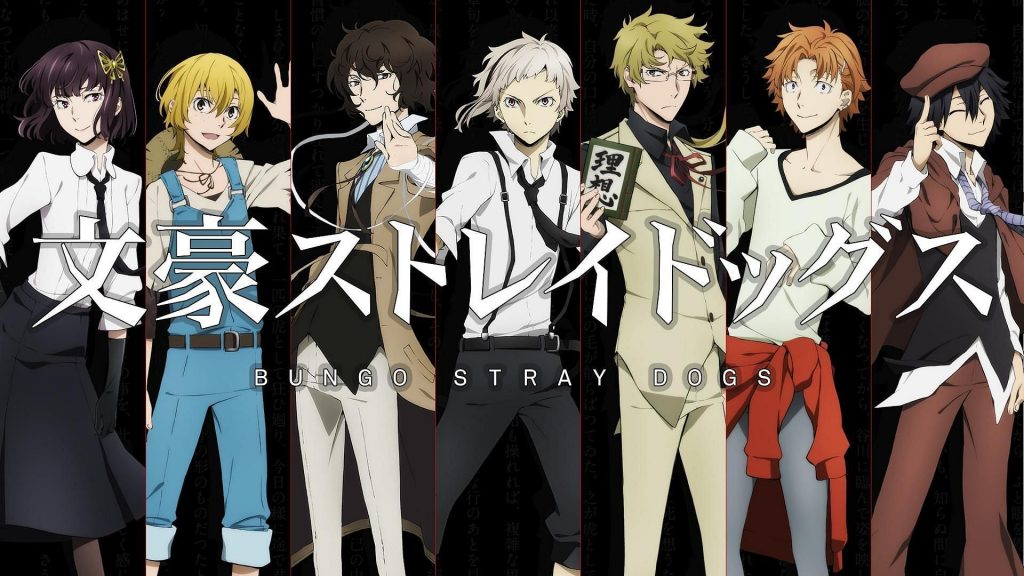 Stop pitying yourself. Pity yourself, and life becomes an endless nightmare.

Nakajima Atsushi is the series protagonist who early on in the series ran away from the orphanage he lived in. Eventually, Atsushi came across detectives Osamu Dazai and Doppo Kunikida and related to them that a white tiger was tailing him three nights before meeting them. It was later revealed by Dazai to our protagonist that he unconsciously transformed into a tiger during a full moon.

Upon hearing this, Dazai then subdued the rampaging Atsushi in his weretiger form using his ability No Longer Human before recruiting Atsushi into an organization called Armed Detective Agency. Most members of the organization (shortened to ADA) are ability users, which they use to solve supernatural crimes.

(Also note that characters’ names are of literary figures and the names of their abilities are their works.)

Throughout the series, we are given insight into each character’s ability — whether it’s extremely powerful or just average. Here’s a list of the 10 Most Powerful Abilities in Bungo Stray Dogs:

As the name implies, Francis Scott Key Fitzgerald is the owner of this ability. By spending his wealth, the ability enables Fitzgerald to have inhuman strength, speed, and endurance making him at par with Atsushi’s weretiger form and Akutagawa’s Rashomon. This ability is not limited only to money but also things he possesses, like his wedding ring and his companies.

However, The Great Fitzgerald is based on his spending thus it’s only useful to him if he is still wealthy as seen in Episode 32: Fitzgerald Rising.

Light Snow is Tanizaki Jun’ichiro’s ability where he can create illusions within an area of screens of snowfall. Tanizaki can use the said ability to conceal himself or other people. Light Snow can be used either for defense or espionage. In the Cannibalism arc, where Tanizaki infiltrated Port Mafia’s headquarters, he used his ability to escape the Black Lizard and entered Ogai Mori’s room undetected. Tanizaki also used the ability to conceal himself, Atsushi, and his younger sister, Naomi, from Port Mafia’s ambush early on in the series, leading him to choke Higuchi and Atsushi attacking Akutagawa.

The downside of this ability, however, is the more time he uses his ability, the less effective it is.

The ability of the schedule freak Kunikida Doppo. It allows him to summon weapons written in his notebook. The Matchless Poet can also be used remotely, as seen in the episode where Kunikida left Tanizaki a piece of paper from his notebook which they used to summon a flash grenade.

The Matchless Port can only summon weapons that are as big as the notebook itself like the handgun Kunikida uses against enemies.

7. All Men are Equal

Fukuzawa’s ability may be passive, but his great swordsmanship earned him the title Silver Wolf for assassinating bureaucrats and military leaders in the Great War.

Just like No Longer Human, Vita Sexualis is almost activated most of the time. The ability manifests as Elise, the little girl who always accompanies Ogai Mori, can attack at high speeds and wields a giant syringe as a weapon. Mori can also fight on his own using scalpels as his weapon of choice.

Although Vita Sexualis is quite powerful, it takes a toll on Mori’s body in the Cannibalism arc (when both Fukuzawa and Mori are infected with Alexander Pushin’s virus ability) and when Elise gets defeated, she just dissipates. Elise couldn’t die, however, but it takes time before he can summon her again.

The show stealer’s ability, Osamu Dazai can nullify one’s ability by touch, hence it has no switch to turn it off. He already had nullified Rashomon and Beast Beneath the Moonlight after the two almost killed each other in Episode 3: Yokohama Gangster Paradise.

Since Dazai’s ability has a specific condition, Yosano’s ability does not work on him due to its nullification properties.

Bungo Stray Dogs Episode 13: The Dark Age is one of the best episodes this anime has. It centers on Sakunosuke Oda, Dazai and Ango’s close friend and subordinate. Odasaku’s (as Dazai and Ango fondly call him) Flawless predicts six seconds into the future, allowing him to dodge attacks and alter the outcome of the future.

The downside of Flawless, however, is when a trap is laid on him. An example of this is when he picked up a ball laced with poison. When the said incident happens for more than five seconds which means this ability can only be used in the present time.

Summoned from Akutagawa Ryuunosuke’s *cough* coat, or any choice of clothing for that matter this ability can easily switch from offense to defense whenever it is deemed necessary. Akutagawa’s ability takes the form of a shadow. Once Rashomon activates, even bullets can’t penetrate Akutagawa as it can also consume space itself.

The downside of this powerful ability however is it can be nullified by Dazai’s No Longer Human and can be overpowered by Fitzgerald’s The Great Fitzgerald.

2. Beast Beneath the Moonlight

Nakajima Atsushi can unconsciously transform himself to a white tiger prior to joining the Armed Detective Agency. Under the influence of Fukuzawa’s All Men are Equal, Atsushi can control his ability for him to have a complete or partial transformation of his weretiger form, regeneration, increased speed, stamina, strength, and enhanced senses among everything else.

Due to extreme changes made towards Atsushi’s body by his ability, he tends to faint after using it tediously.

For the Tainted Sorrow is Nakahara Chūya’s ability wherein he can control gravity. He can use gravity to enhance his speed and strength. However, as the God of Calamity is within Chūya, he can unleash his ability to its full potential as Corruption. Chūya can create black holes and gain more power to defeat his foes as seen with his fight against H.P Lovecraft.

However, whenever Corruption is activated, it becomes uncontrollable. The only way to stop him from rampaging is with Osamu Dazai’s No Longer Human.

We also have characters from Bungo Stray Dogs who are worthy of mention, although they do not have their own abilities:

H.P Lovecraft’s eldritch monster form called The Great Old One. Lovecraft can convert parts of his body to green tentacle-like matter and can also unleash his true form – a monster who looked like Cthulhu. It regenerates its severed limbs and can even turn its head 360 degrees. Chuuya and Dazai come face to face with this monster, though it is powerful, the duo managed to subdue the monster as its weakness is from the inside. The Great Old One is not an ability, therefore, Dazai can not nullify it.

Edogawa Ranpo Armed Detective Agency master sleuth. Super Deduction, as he calls his “ability”, allows him to pinpoint the truth of a crime in a matter of seconds. Ranpo “activates” it by wearing the glasses given to him by Fukuzawa. Eventually, it was revealed that Ranpo doesn’t have any ability however he possesses incredible intelligence. He denies it, wanting to feel like he belonged to the Agency, however, he came to terms with it but still wears the glasses whenever doing detective stuff.

Now that the series is confirmed to have a season four as shown on Bungo Stray Dogs website, many fans are waiting for the official release date. Coverage for season four is probably the Hunting Dogs arc, while I am still hoping that BEAST will be animated soon.

Who do you think is the strongest Bungo Stray Dogs character?