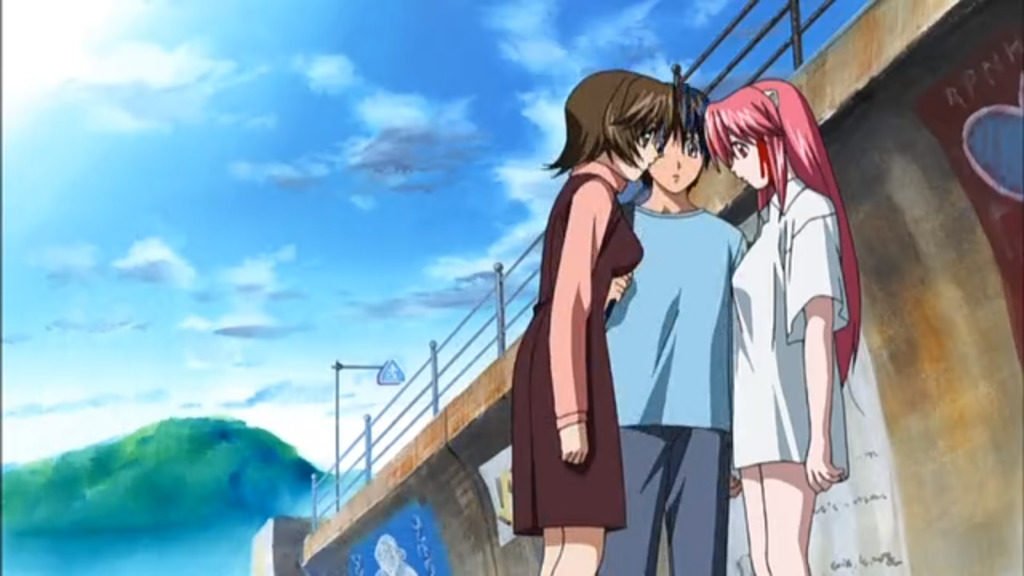 Elfen Lied is an anime I’ve heard talked about by multiple people and the vast majority of it has been exceedingly negative. Terms like “worst anime ever made”, “trash” & “containing nothing of value” have all been thrown around. The series is based off of a manga written by Okamoto Lynn and was handled by Arms. A studio I’m not super familiar with. Most of their works are listed as either Ecchi or Hentai and I don’t tend to watch either. So, is this anime as bad as virtually everyone has told me it is? Let’s go down the rabbit hole and decide for ourselves.

We open with a severed arm on the ground. We then get to watch as a naked girl with pink hair & horns, Lucy, tears her way through a bunch of people while escaping a secure facility. We cut to a young man and woman, Kouta & Yuka, finding the same girl, still naked, on a beach. They take her in because she seems harmless enough, not even being capable of speaking normally (She can just say “nyu”). From there the series explains what she is, how her powers work and shows the agency she escaped trying to retrieve her. All while she’s just trying to live with the cousins who picked her up.

Let’s delve right into the narrative problems with the series. You might want to get some tea and biscuits, this may take a while. First off, let’s talk about the “horror” aspect of the series. I use quotations there because this series is about as scary as Twilight. The series substitutes copious amounts of gore for actual horror elements. Not only that, but the whole element is under-mined. Not just by the gore effects coming across as silly more often than not but because it’s full of stupid little moments. We get a character later on who fires her arms like a mecha doing a rocket punch. We also have a scene that’s very reminiscent of the black knight scene from The Quest for the Holy Grail, but here it’s being taken seriously. And therein lies the fundamental flaw with gore-based horror. It’s not scary. It’s either just gross, if it’s realistic, or, in this case, overblown to the point of absurdity. Obvious comparisons to Corpse Party are obvious.

Now, let’s go into the subject of dramatic contrivances. This series has a lot of moments where the reasonable, realistic narrative course is disrupted for something stupid that doesn’t make a lot of sense but it’s supposed to be dramatic. Now, I’ll warn you that there are going to be some minor spoilers ahead. So, if you think that you might want to watch this anime and you want to go into it without knowing too much, just skip this paragraph. Our first example has to do with Nana. She’s got the same type of power as Lucy but she won’t hurt humans. So, naturally, she’s sent to try and subdue Lucy. This results in her losing all her limbs. As such, she’s seen as useless and the director is ordered to kill her. However, we see that this organisation has functional prosthetic technology. They use it for some nobody mercenary because he could be useful but the obedient girl with actual super powers isn’t? How does that work, exactly? Not only that, but she’s given artificial limbs when orders are broken that she can move around on just fine. It’s almost like the orders to put her down are super flimsy to the point of being nonsensical. Another prime example comes when a scientist is cut in half and tossed through heavy glass but she somehow lives long enough to press a specific button and maintains the presence of mind to do so. And I’m sure someone is going to say “Wait, you can believe the whole premise of these girls with superhuman abilities but that breaks verisimilitude for you?” Well, yes. I can buy that in this world there are girls with these abilities but this is supposed to be a regular human and I don’t believe for one second that a regular human could manage that. Rather I think that the scientist in question only manages that because the writer wrote his way into a corner and needed some utter bollocks to get out.

Let’s move on to the “psychological” elements. This series is as bad at handling psychology as it is with horror. The attempts at doing so can be put into two categories. The first are exposition scenes where a character talks to a bunch of faceless mannequins in a shadowy place. Get it? It’s like they’re talking to themselves to confront their issues. It’s super shallow and not remotely clever. The second method is having flashbacks that show some traumatic past. The trouble here is that, for the most part, these flashbacks contribute nothing to the narrative and largely serve as a vehicle to give characters informed characteristics rather than actually granting them any kind of depth. Some of the flashbacks are even repeated in a short span of time because they really want to hammer them in. And don’t expect the serious topics like sexual abuse, severe bullying or murder to be handled with any kind of maturity. Clearly, Okamoto isn’t the best at handling serious themes like an adult or like somebody with any degree of writing skills.

Let’s move on to the “romance” elements. Elfen Lied went to the harem school of romance writing. Kouta is being romantically pursued by his cousin and by Lucy. Both of whom are childhood friends. He also ends up living with a young homeless girl, Mayu, & Nana. And there are stupid scenes that seem like they’d come right out of a harem. Nyu, Lucy’s other personality, randomly gropes Yuka. Yuka walks in on Kouta and Nyu in multiple compromising situations and always gets mad at him for it. I’ll draw more comparisons between this and harem shite in a moment when I discuss the characters.

Speaking of ways that this series “psychological” element is royally buggered, let’s talk about the characters. Like a terrible harem series, Elfen Liedhas characters who are really shallow including a generically nice guy protagonist who the ladies seem to flock to by virtue of his blandness, Lucy suffers from the pop culture version of a dissociated identity. She’s a wholly shallow yandere character and her other self, Nyu, is your naive innocent. Yuka might as well be Love Hina’s Naru and the antagonists are just cartoonishly evil.

Now, I want to return to what I said about the tragic back stories and how little they matter to the characters. This is going to be a spoiler, so you may want to skip this paragraph if you’re still interested in watching this series. Now that that’s out of the way, let’s talk about Kouta’s tragic back story. It’s heavily implied from very early on that Kouta’s father & sister were killed by Lucy. In a very obvious turn, he regains his memories and finds out. As for why he lost them, there’s no adequately explained reason for it. Maybe the manga says. Upon remembering what she did, Kouta embraces her and urges her to come back and live at the Inn with everyone, like you do for the murderer of the family you loved. Wow, did that revelation contribute nothing. It’s almost like this entire series is just a poorly written mess.

I’ve already talked about one of the big art problems, the absurdly overdone gore effects. So, I shan’t linger on it much. I’ll just say that this is one of those series where blood spurts like it’s coming out of a high-powered hose instead of a human body. The nudity is also an issue. We’re supposed to be taking this series seriously, for the most part, but it feels the need to come across as highly puerile with its handling of both nudity and violence. Both aspects come across as a twelve year old trying to write something “mature” and having nudity & blood all over the place totally makes it mature, right? Well, that’s where you’re wrong. You see, a truly mature writer knows how to use elements like that sparingly, to create a specific effect. A lousy writer just tosses them all over the place to the point where any impact is going to be irrevocably lost through over-saturation. Which is what we get here. So much gore and nudity that it loses all impact. Aside from that, we have some goofy action sequences and artwork that manages to be, at best, mediocre in some scenes.

I’ve heard some of these actors deliver decent performances before, good even. Kobayashi Sanae, Matsuoka Yuki, Noto Mamiko & a lot of the other actors are good actors. Unfortunately, this is one of those series where the direction demands performances that are either very flat or exaggerated to all hell. Which leads to them sounding like they belong in old Hollywood B-films. They’re just bad performances. The music is probably the best element of the series. It’s just average, but it’s not bad. Which is more than I can say for most of this schlock.

There’s the scene where Nyu gropes Yuka for no apparent reason. That’s the most ho-yay you’re getting.

I now fully understand why the vast majority of people I know hate this series. Elfen Lied is an attempt at sensationalism without any regard for restraint, character motivation, characterisation, class, narrative or anything else. Its entire draw is being crass & over the top. I’ve seen slightly worse anime but, ultimately, I can’t recommend it. My final rating is going to stand at a 1/10. It’s utter rubbish. Plain and simple.