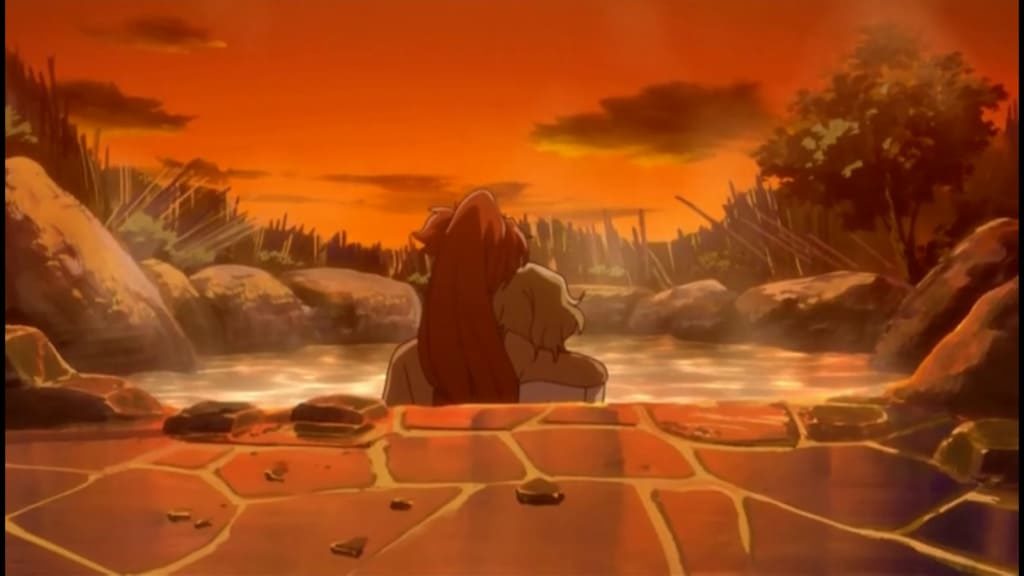 I once reviewed an anime called Noir, a really well-done series from Bee Train. At that time, I also briefly mentioned that it has two spiritual successors. The latter one ran in ’07. Six years after Noir. This is El Cazador de la Bruja, written by Kanemaki Kenichi. Does it live up to its predecessor?

Nadie is a bounty hunter on a mission. She has to find and protect Ellis, a girl with a bounty on her head. With some help from the elderly fortune teller looking after Ellis, Nadie is able to convince her that they should travel together. Thus they begin their journey to the eternal city, Wiňay Marka. Presumably, because it’s holding the year’s girl on girl tea party and Overwatch tournament. Actually, it’s because Wiňay Marka may hold the key to unlocking Ellis’ fragmented memory and the truth behind her mysterious power.

Like Noir, El Cazador has a really strong setup. It quickly introduces the mysterious elements that will get expounded upon and eventually explained. It does so in a way that captures the attention and keeps you invested. Unlike Noir, however, El Cazador doesn’t have any elements where the reveal is kind of weak. Its mysteries all have satisfying, well-constructed resolutions. El Cazador may also exemplify what I like about so many of Bee Train’s works. This series actively makes fun of two tropes I really hate. The first being the stereotypical gay characters which they poke fun at with a pair of gag villains. They do it pretty subtly too. You might think they were playing the trope straight if our protagonists weren’t so blatantly gay for one another. They also poke fun of generic let down endings in a way that’s absolutely brilliant but that I won’t spoil. I will say, this series has one of the best, most satisfying endings I can recall. It’s even better than Noir’s and that one was fantastic.

This series may also have the best romance I’ve seen in anything. The relationship betwixt Ellis and Nadie is beyond superb. It starts out being very much all business, transitions into friendship and finally blossoms into something more. Part of what makes it so good and believable is that our heroines fall for one another at different times with Ellis falling in love with Nadie first. Which makes sense since Nadie has to move past thinking of Ellis as someone she needs to protect for a job before she can fall for her. Their relationship also has very natural ups and downs stemming from various events, which may or not may be related to the main plot. Not only that but it has a lot of absolutely adorable moments. Just when you think that nothing can top the cute scene in episode 15, episode 19 happens. Then you think that nothing could possibly top that in terms of being a cute romantic scene but the series does.

The main heroines are absolutely phenomenal. I love Nadie’s flippant outlook and the way it occasionally masks the fact that she’s actually taking something seriously and the writing is complex enough that you can tell when she’s actually flippant versus putting on a façade. I like that Ellis is innocent and naïve in some ways but also clever and knowledgeable about certain things that she’s more familiar with.

The side characters aren’t as strongly developed, but they’ve enough to them that they have verisimilitude. Even when they go by bizarre code names like “Blue Eyes.” I’m not sure if she’s called that because she has pretty, piercing blue eyes or because she wants to have her face put in a children’s card game. I actually really like Lirio, the child character, as well. I’m not normally a fan of child characters or children in general, but I really like the way she’s handled. I like that we see her take inspiration from the adults around her and grow as a person thanks to their influence and I like the way the change is gradual and subtle, like the character development in general.

Then we have our antagonists. Unlike Noir, El Cazador doesn’t give us sympathetic main villains. There are still some sympathetic antagonistic characters, just not the big two. They’re complex villains with understandable motivations, but they’re also right creepy gits who have some small redeeming qualities, but they get heavily over-shadowed by all the ways they’re despicable. Chloe was a villain you felt sorry for. L.A. Is a villain you want to see get his comeuppance and you kind of want to see it come from Ellis so he’ll stop doing things like stealing her hair while she’s sleeping.

The artwork and animation are probably the best I’ve seen from Bee Train. The character designs are distinctive and the way they do the eyes is incredibly expressive. It’s like their artists took the old adage about the eyes being windows to the soul and decided to represent that. The action scenes can be strategically slow to build up tension or fast-paced and intense. The backgrounds are nice. About the worst, I can say about it is that it does do the usual Bee Train thing of having odd angles because… weird angles are more dramatic according to some high up animator’s theory.

The acting is amazing. Itou Shizuka and Shimizu Ai are fabulous in the lead roles. They not only deliver the lines well, but they manage the difficult task of conveying the tension and chemistry between the leads. Which may very well be the result of superb directing. Miyano Mamoru also gives a really good performance as L.A. Hisakawa Aya is splendid as well in her role as Blue Eyes. The cast is just top notch in general. The music is really superlative as well. Savage Genius does a great job with the theme performance Kaida Yuriko did a sterling job of the music composition throughout the series. It really evokes the setting and complements the series as a whole.

In addition to the greatest romance I’ve ever seen in media, El Cazador de la Bruja also has the aforementioned gag characters designed around taking the piss out of common stereotypes. There’s also some indication that Blue Eyes has a bit of a thing for some of the other ladies. The stuff betwixt our heroines is certainly the most pervasive, important, adorable and blatant use of ho-yay in the series, though.

Dammit Bee Train, stop being good so I can heavily castigate one of your series! In all seriousness, this anime is astonishing. It combines a compelling narrative with an awe-inspiring romance. A road trip full of twists and turns with a fascinating cast of characters met along the way. I have very little that I can say about this series that’s negative and that complaint is very minor. I absolutely adored this series and I’ll re-watch it periodically. My final rating is going to stand at a 10/10.