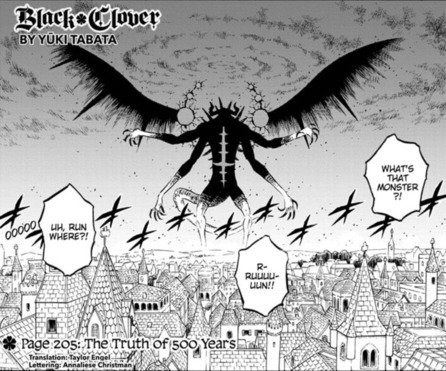 After Litch was able to thwart the Demons plan by transforming into a monster rather than let the Demon take his body, Prince Lumiere prepared to battle him and save everyone from the monster Litch turned into.

As the battle raged on, Secre blamed herself for what happened as the cause was the magic stones she created. After realizing that the battle could cause the loss of the kingdom, she decided to use the magic stones to drain the monsters mana. While the plan didn’t work out, it created an opening where the Prince was able to finish off the monster.

The Demon was disappointed at the loss of a chance at a physical body but was ready to retreat with its new five leaf clover only for Secre to ambush it and use a magic stone to seal it. Before the seal took full effect however, the Demon was able to start a plan where it used reincarnation magic on a soul that possesses a four leaf clover grimoire and send the soul to the future which would cause its plans to take effect in a time when Secre and Prince Lumiere won’t be there to stop it.

Knowing that the seal would one day come undone, Secre used the last of her strength to seal Prince Lumiere to preserve his life so he can be there to protect the future. Using that much forbidden magic consecutively took its toll and when Secre woke up years later, she had the form of a bird. She spent the next 500 years protecting Litch’s grimoire and waiting for the day the battle can finally be brought to an end.

Back to Asta, Yuno and Patolli who were still fighting the Demon, Prince Lumiere (The First Wizard King) burst into the room along with Secre much to the amusement of the Demon and the surprise of Asta.

We finally get to know the real history between the Human and Elves and how they have both been objects of manipulation for a much greater enemy. It also shows that the First Wizard King was more of an honorary title as Prince Lumiere was sealed after his battle with the monster and would have never had the time to actually be crowned Magic Emperor.