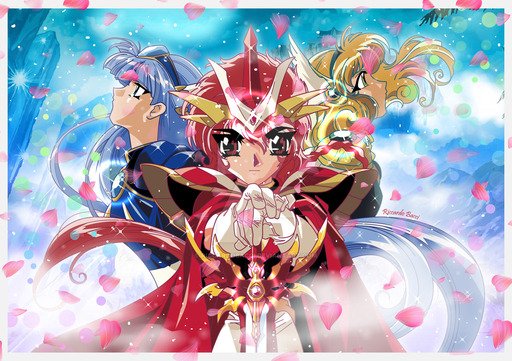 Magic Knight Rayearth is an early 90’s Shojo series that was written and illustrated by CLAMP.

It tells the story of three Japanese high school girls, Hikaru Shido, Umi Ryuuzaki, and Fuu Hououji, who all meet while their individual schools are visiting Tokyo Tower on a field trip.

With that said, the three girls are instantly transported into Cephiro from high up in the sky. They land on a giant flying fish (Fyula) that acts as transportation to where they will first meet a Master Mage by the name of Clef.

After meeting Clef, and Hikaru learning her first fire spell from him (Flame Arrow) the three girls must travel through the forest of Silence to come across Master Smith Presea where they must go to get their first set of weaponry and to meet their guide, Mokona.

From there they must go to the Spring of Eterna to find a magical ore by the name of Escudo, which will allow them to not only upgrade their weapons and armour but to also have weapons that act according to how strong the will of their hearts are.

Throughout Magic Knight Rayearth, Hikaru, Umi, and Fuu must fight against monsters that are basically the manifestation of all the hearts in Cephiro that fear, and against the enemies that are sent by High Priest Zagato to stop them from successfully becoming Magic Knights. All the while making some friends in the process (Ferio, Ascot, Caldina, Lafarga, etc.)

From the words of Ferio, a prophecy has been foretold in the land of Cephiro that the three Magic Knights would awaken the Three Rune God’s power and save the Princess and the land from corruption. So it is up to the Magic Knights to Don these Mashin that transform into giant Mecha’s that the Magic Knights can fight within.

Coming around the end of their journey, it becomes apparent that there is more to the reason behind why Princess Emeraude summoned them to Cephiro. A reason that is actually quite selfish by nature. It turns out that Princess Emeraude, who acted as the Pillar over the lands of Cephiro, to stabilize it with peace, had turned her attention away from that responsibility over to her love for High Priest Zagato, who the Magic Knights had originally thought was her captor.

After the final outcome is finished, the season ends with Hikaru, Umi, and Fuu returning to their homeland of Japan inside Tokyo Tower, where they wish to return to Cephiro one day to help restore its’ lands to its former glory.

Magic Knight Rayearth continues to be a very treasured original anime to me. I like to watch it every now and then because it’s just one of those series that has a lot of fun stuff going on in it. It’s also a series that emphasizes the power of the will, which is a theme in anime that I like a lot!