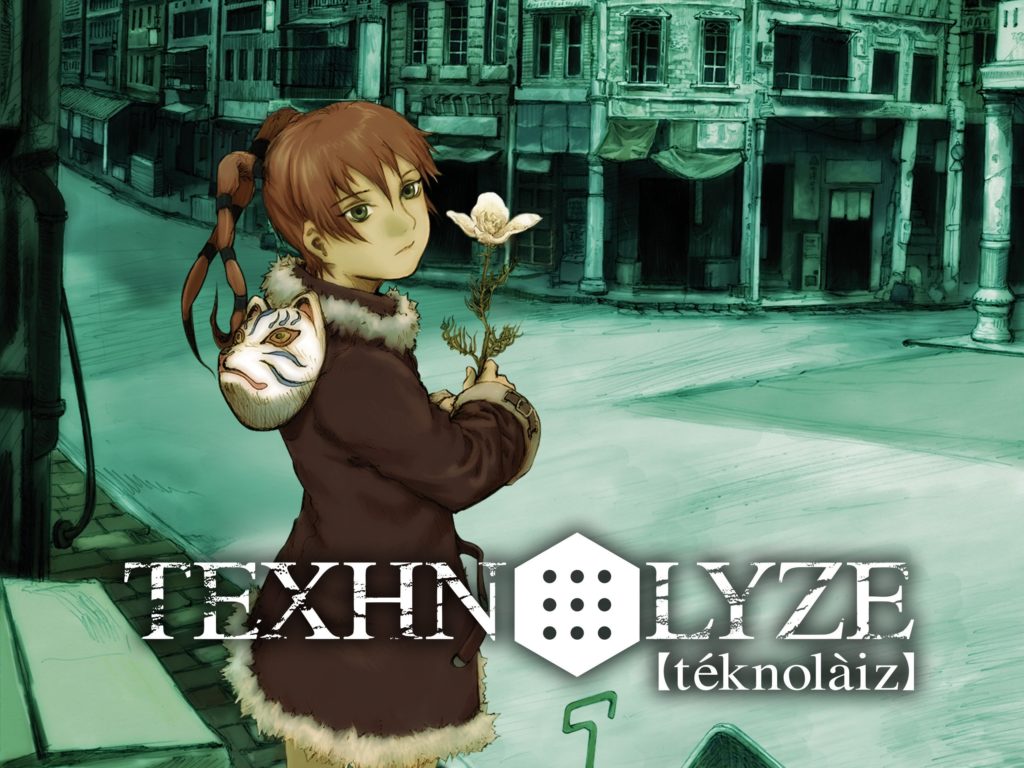 Chiaki Konaka is a very celebrated writer in the world of anime and for good reason. Mr. Konaka has consistently proven himself to be among the most challenging, innovative, and important anime writers in the last 25 years. While most people would choose Serial Experiments Lain as his magnum opus, Texhnolyze is actually my favourite Konaka work I’ve seen so far.

Firstly, I’m going to issue a little warning. Texhnolyze is not a cheerful series. It isn’t a fast-paced series. There is no comedy you will find here. There isn’t any fanservice and you won’t be getting into a “best girl” argument. Part of what makes Texhnolyze so admirable is also a point that causes division. The simple fact that this is an uncompromising, oppressively bleak series. After 22 episodes it just leaves you feeling completely drained emotionally. However, I would argue against the people that say Texhnolyze is purely nihilistic in its philosophy. Texhnolyze is more appropriately categorized as an existentialist work that’s also a harsh warning against transhumanism and futurism. The hard stance against transhumanism and futurism is something it shares with Serial Experiments Lain, making Tex a sort of spiritual successor to Lain.

At some point in the future, a dystopian system is created. The vast majority of the human population is purged in a massive culling. Some survivors that are considered violent and degenerate are sent to live in a city deep underground, evoking Dante’s Hell. The underground city of Lux is controlled by 3 factions: a Mafia group called the Organo, a populist cult called the Salvation Union, and a bunch of rebel punks called Racan. The people who dwell on the surface world give cybernetic appendages to the Organo, so they can use them in combat to keep their position of power. In exchange, the Organo harvest spinal cords and biological material to give to the surface dwellers to use in their cybernetic research and bioengineering. The surface world seems like a utopia at first, but this means that humans have nothing to struggle against or strive for. Without the ability to suffer, the surface dwellers become so apathetic that they just wait around to die.

The story is mostly told through the eyes of a young man named Ichise. He is an MMA prizefighter whose father was executed for a crime he didn’t commit and his mother died in a mining accident. One day, Ichise’s boss decides to buy him a prostitute, even though Ichise isn’t interested. She gets rough in bed and gouges him the eye, so Ichise throws her out. This is taken as an insult by Ichise’s boss, so our hero gets an arm and a leg cut off. Fortunately, a scientist lady, known as “Doc”, manages to find Ichise and give him cyborg limbs. She’s affiliated with the Organo and now so is Ichise…not like he has anything better to do. In another subplot, a surface dweller named Yoshi sees the malaise that “utopia” created and decides to create as much chaos as he can because he believes that’s the environment humans best thrive in.

Later in the plot, we get a lot of mafia power struggles and a new villain named Kano…who tragically doesn’t have a heavy Australian accent in the dub. Kano believes Free Will is a mistake and humans would be better off as mindless robots. He invades Lux with his robot army and takes over from Yoshi as the chief antagonist in part 2 of the series.

Our main character is Ichise, but he’s more of a guide for the viewer than being a traditional “hero”. Ichise is so broken emotionally, spiritually, and otherwise that he has become quite animalistic. He generally does what he’s told and lacks any kind of direction in life. He typically gives in to blind, rabid rage rather than acting on logic. He is a man stripped of everything besides his essential instinct for survival. While Doc is sexually attracted to Ichise, he never seems to return her feelings. The closest thing to an intimate, human relationship that Ichise has is his friendship with an openly gay mafioso named Toyama. This has, of course, led to questions about Ichise’s sexuality, but Texhnolyze is as vague here as it is in most places. I will say though that in episode 12, Toyama leans over to whisper something sensually in his ear. Then the scene cuts directly to a shot of a train entering a tunnel. Draw your own conclusions.

Onishi is the honorable gangster who might actually be the most moral person in this series. As a child, he felt bad for another kid who was born without legs and donated his own as an act of pure charity. Onishi realizes that Lux is an awful place, but he clings on to the fact that people are still trying to find happiness and live their lives. For that reason, he will protect Lux at all costs and defend it from Yoshi’s chaos and Kano’s robots. Onishi will use violence when absolutely necessary but he is generally hesitant to do so. He also places a strong emphasis on loyalty and family.

Yoshi is probably Texhnolyze’s most iconic character. He does evil things and feels no pity for those he kills, but his reasons are understandable. He grew up in a civilization that faces apathetic, slow extinction because it denied people the ability to suffer. Dostoevsky wrote in Notes From Underground that suffering is the sole origin of human consciousness. His comrade in early existentialist thought, Friedrich Nietzsche, wrote that “to live is to suffer, to survive is to find meaning in that suffering”. Despite being a complete sociopath, Yoshi is almost sympathetic in his actions.

Finally, we have the 2 transhumanists Doc and Kano, which are 2 sides of the same coin. Doc believes that making people into cyborgs will allow humanity to escape from its primal and violent nature. However, increased technology doesn’t always lead to less violence because human nature remains unchanged. Konaka’s rejection of transhumanism is based on his belief that human nature is essentially immutable. Humans are fundamentally irrational creatures that by their very nature are capable of being cruel, violent, and hateful. No amount of technology and new gadgets are going to change that. Kano is FAR more pessimistic than Doc and is easily the most Nihislitic character in the series. Kano hates essentially everything about Mankind and feels that allowing humans to have free will can only result in destruction and grief. “Nothing has ever been more insufferable for Man than freedom! Not even that Fosters piss the yanks drink!” Nope, I won’t let it go that he shares a name with a goofy Mortal Kombat villain. Texhnolyze doesn’t have any fun, so it’s necessary I create my own!

As I mentioned in my character analysis, Texhnolyze’s key themes relate to human nature. Firstly, humans have an absolute need to suffer and strive for improvement. A perfect utopia would paradoxically become Hell to its human inhabitants. Secondly, Konaka warns that transhumanism and futurism ignore human nature and erroneously believe that increased technology will lead to decreased violence and increased happiness. Lastly, Texhnolyze shows that no matter how awful life becomes, humans will learn to adapt to that suffering and keep desiring to live. “Man is a creature that can get accustomed to anything, and I think that is the best definition of him”.

The art by Studio Madhouse is spectacular and I’m beginning to grow tired of having to say that sentence. Madhouse just knocks it out of the park again and again…which is why I enjoyed reviewing Junk Boy just so I could finally shit on them. The character art was done by Konaka’s longtime friend Abe, who of course also did the character art for Lain and his own series Haibane Renmei. The only issue with Texhnolyze’s art is that the colour palette is SO dark. It makes it very difficult to watch if you’re viewing it on a pirate streaming site like Kissanime or Animefreak. There are scenes where I could barely tell what was happening. Since it’s no longer on any legal streaming sites, I recommend getting the DVD if you can afford it.

Apart from a kickass intro, Texhnolyze has a fairly minimalist soundtrack. That’s because this is a highly atmospheric series with a lot of long pauses. If music was playing all the time it would only take away from the mood.

Texhnolyze is good. Texhnolyze is VERY good. The online elitists aren’t just pulling your leg this time. However, it does suffer from a fairly slow start and later becomes SO emotionally draining that it’s hard to watch for many viewers. As a result, I can’t quite recommend this one for everyone. I think most of my offline anime buddies would dislike this more than they disliked Lain. If you’re a fan of Lain though, this series is essential viewing. Personally, I got a lot out of Texhnolyze and I’m very glad I finally gave it a chance. Now I want to watch something just a wee bit less depressing…maybe I’ll check out Aria if the whiplash doesn’t kill me.

If you liked our article on Texhnolyze and would like to immerse in more of such interesting reads then you should head to our homepage by clicking this text. Happy Reading! 🙂