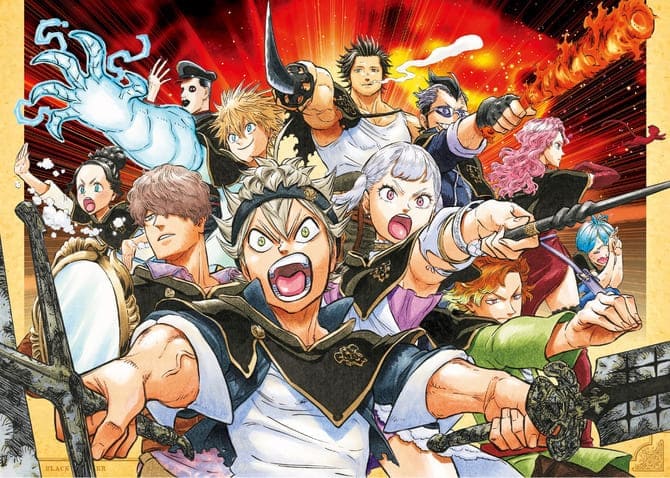 The conclusion of the last match saw Solid still in shock about his loss to his sister Noelle while he is being healed for his injuries.

Alecdora was also broken due to how easily he lost to Yuno. Yuno made a comment about the mental fragility of the noble elites which surely has its root in their arrogance.

This has been a recurring theme, especially among the elites especially those who are yet to reach high positions and I feel it is interesting that it is being pointed out.

The elites never really have to struggle for much therefore they don’t know how to handle loss. Something like this can only make them stronger….or fall more into despair. We would have to see how that turns out.

The second stage was to begin but first, the stage was rearranged and the landscape changed to judge the Knights on how they adapt.

Xerx was seen to be visibly disturbed by this. Kirsch declared how he was going to remove the filth that is Asta in their upcoming match to which Mimosa defended him.

Asta and Magna were pumped for their match and reminded each other not to hold back.

Asta called Xerx out on his discomfort about the stage change, to which he admitted to setting other traps the night before.

While Asta believed he had cheated, Xerx saw it as gathering intel. The fact that there are no explicit rules against it and neither has he been called out on it, means it is okay.

Asta wanted to know the position of the traps but Xerx refused, citing that their opponents might figure it out if too many people knew of it.

The match started and Kirsch started the offensive by blanketing the area with his Cherry Blossoms magic thereby creating an illusion space.

Mimosa and Xerx realized they had no way of breaking the spell and Xerx was planning on then sitting tight and hoping their opponents triggered his traps.

While Asta was impressed, he brought out his sword and started to prepare himself for an ace in the hole which turned out to be his Black Asta form.

Using the anti-magic of this form, he used “black hurricane” to erase all the magic in the area, both Kirsch’s cherry blossoms and Xerx’s prepared traps.

When he was done, Xerx was angry about his traps being destroyed but Asta was happy as he saw it as a chance for Xerx to come up with a plan that would enable them win fair and square and as a team.

Asta explained that he won’t be able to use his Black form for a while, so Xerx has no choice but to come up with a plan. Asta mentioned Xerx that they are trying to join an elite squad that would fight the terrorist group “Eye of the Midnight Sun” and none of them can do it alone. His words seem to get to Xerx, who remembered someone else telling him something similar and the flashback revealed Xerx to also be called Zora.

The entire banter between Asta and Xerx was interesting to watch and it showed two contrasting personalities. One who believes in teamwork and the other who solely believes in his own strength and sees a team as a stepping stone for his own goals.

However, it seems Asta is winning Xerx over a little at a time or at least making him question his beliefs. Xerx finally explained his magic to his teammates and they prepared their plan.

Meanwhile, Kirsch is still disturbed about how Asta destroyed his magic while Magna was impressed at how Asta was making it known that peasants like them shouldn’t be underestimated.

Having a peasant on his team proved to be the final straw for Kirsch and he went off to win the match alone while charging his teammates to protect their crystal.

Kirsch eventually came across Asta and attacked him with “Cherry Blossom Blades”. Asta defended himself with his Anti-Magic sword, though, some of the attacks still hit him.

Asta retreated deeper into a tunnel which turned out to be a ploy to lure Kirsch into the set traps but Kirsch realized that and triggered the traps with his clones. He then entered the tunnel preparing to attack Asta only to fall into a pitfall trap.

While Kirsch was wondering how he missed the trap, it was revealed that the trap was not a magical one but a physical one and the plan was to use Kirsch’s high mana detection skills to make him overlook the real trap. Asta proceeded to knock Kirsch out with his swords and told Xerx how glad he was that they finally worked as a team.

While the match is far from over, Asta seems to be winning Xerx over in his ideology of how teams work. While Xerx is still stubbornly holding on to his philosophy, his visual cues show how disturbed he is by Asta’s beliefs as it seems to mirror beliefs he might have once held or heard from someone he respected.

Black Clover continues next week with a continuation of the match between Team B and Team C.