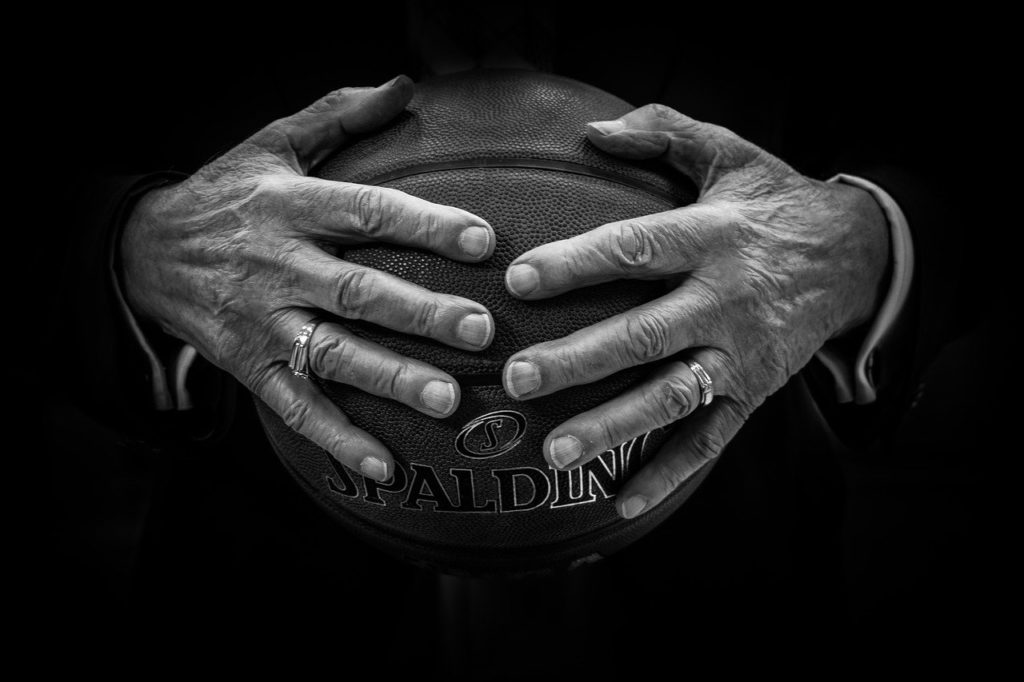 Usually performed by post players but is an important shot for a player regardless of his position. In this shot you usually fake a jump shot or fade away to get your defender out of position and then perform a finger roll. The move was popularized by Celtics legend Kevin McHale. A more difficult version of this shot is performing it on air while going for a layup. This requires tremendous air stay and control from the player.

The most difficult shot to master for a beginner and the gateway to have an unstoppable offence. The jump shot involves jumping from one spot and shooting the ball by flicking the wrist of your shooting hand using the non-shooting hand just for support. It is important to note that while shooting a jump shot the palms of your hand should not touch the ball. The shot is usually used to shoot 3 pointers in the NBA now a days but can also be used for mid-range shots as well. Some of the popular NBA shooters are Stephen Curry, Klay Thompson, Danny Green, James Harden, Kevin Durant, Paul George and many more.

Used by a player usually while performing a layup or a jump shot in which he changes his shooting form to a different angle in order to avoid the defender. The move is usually used while performing layups and used in jump shots only when there is a desperate situation like when the time is running out to avoid a shot clock turnover. The move is more popular among guards and you can see players like Kyrie Irving and Damian Lillard perform a double clutch often in games.

Popular move used while driving from the baseline. In this move the player usually shields the ball from the shot blocker with the help of the rim and finger rolls for a layup. The move was used most effectively my MJ who used to perform it at a very high level.

One of the most effective moves used by shooters in basketball. Used to get the defender off his feet and either drive or shoot a jumper. The move is most effective when a defender is closing out on a shooter at the 3-point line and trying to block the shot rather than contesting it. The shooter can pump fake and shoot for an open 3 or drive and score or even drive and kick out to an open shooter. Stephen curry and Klay Thompson use this move the best as their shooting ability causes so much panic amongst defenders.

Another tool necessary for post players but also important for other positions as well. The move was popularized by the legend Kareem Abdul-Jabbar who used his famous sky hook to become the greatest scorer of the NBA. His record for most career points scored is yet to be broken. The hook shot involves a side arm motion and a gentle flick towards the basket. This move is performed by aligning your body sideways to the basket rather than facing the basket. The move is very popular among modern NBA post players like Joel Embiid, Karl Anthony Towns and Anthony Davis.

One of the most difficult shots to master as this shot requires tremendous control and balance of the body. Usually performed while shooting a jump shot, in this move the player rather than jumping straight up jumps towards his back side to create separation from the defender. The shot was popularized by MJ, Dirk Nowitzki and Kobe Bryant and both the players used it very effectively. In today’s NBA Kevin Durant and Kawhi Leonard use this move often.

One of the most popular moves in the NBA today and also helps in drawing out fouls. Usually used during fast breaks and transition offence but can be used in half court sets as well. In this move the player while going for the layup plants his first step in one direction and moves for his second step in the opposite direction to finish leaving the defender confused. The best part of this move is that you a can also add a third combo on it if a defender is now able to predict the move you can use the second step again to change direction and finish while being on air. This move was popularized in the NBA by Spurs legend Manu Ginóbili and is used by players such as James Harden, Kyrie Irving, Giannis Antetokounmpo, Russell Westbrook, Kevin Durant and many others.

One of the best shots to master if you have difficulty shooting jumpers from mid-range. In this move you shoot from one hand by aligning your shoulder and shooting hand right between the center of the ring and flicking your wrist. This move is usually used by smaller guards in the paint area to shoot over shot blockers. If the shot blocker is too big the guard can also shoot from the free throw line. Derrick Rose, James Harden use the floater very effectively in their games.

One of the most unstoppable moves in NBA today and needs mastery of the jump shot to be performed. The step back is the best way to create space and knock down a jump shot. In this move a player while dribbling or when in contact with a defender fakes his drive to the basket only to step back and shoot a jumper. The player can also take a step to either side depending on the situation. This move is widely used by James Harden, Kyrie Irving and Stephen Curry from the 3-point line and mid-range.