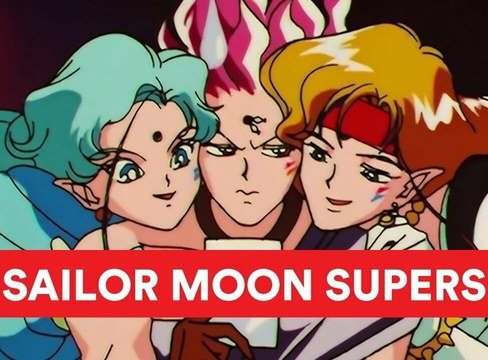 Sailor Moon SuperS is the fourth season/instalment of the original Sailor Moon anime adaptation from the ’90s.

The story begins with the people of Tokyo, Japan, including Usagi Tsukino and her friends, all watching for a particular event that is set to occur that very day; this event is an eclipse, where the Sun is completely enveloped by the Moon so that the Earth becomes darkened.

While the Earth is being overshadowed by this eclipse, aliens from another dimension, in the form of a circus, called the Dead Moon Circus, make their landing on the Earths surface in Tokyo, Japan. They use the darkness of the eclipse to land on the Earth so that they are not noticed.

Now the concept behind this seasons story has to do with dreams that dreaming children have. There is one dream that glimmers brighter than any other dream, a dream that can only be found through what’s called the Golden Mirror. (Every other dream that is not the chosen dream is within a Pink Mirror, and some occasional dreams are more of a pale purplish, which means they pretty much have no dreams within their hearts at all.)

The Dead Moon Clan under the Evil Queen Nehelenia consists of the Amazon Trio (Tigers’ Eye, Fish Eye, and Hawks’ Eye) and four younger girls (CereCere, PallaPalla, JunJun, and VesVes) who do the bidding of trying to locate the Golden Mirror (to find the whereabouts of Pegasus) directly under Zirconia, who works directly under Queen Nehelenia.

It turns out that the reason why they are trying to find the brightest dream < the Golden Mirror < Pegasus, is so that they can take custody of the Golden Crystal, which is actually the horn on Pegasuses forehead.

The Golden Crystal both responds to Queen Nehelenia’s dark power, and the pure dreams of the people of the Earth, it is an energy amplification device that allows Queen Nehelenia to retain her beauty outside of a prison mirror that she was concealed in for millennia.

Throughout this season, the Amazon Trio and the Amazon Quartet, use monsters, that come out of shadows that they cast, which Sailor Moon (As Super Sailor Moon) and Super Chibi Moon (ChibiUsa) have to dispel by Super Chibi Moon first praying to Pegasus (which is actually inside ChibiUsa’s dream as the possessor of the Golden Mirror) and then ringing a bell and chanting ‘Twinkle Yell’ that summons Pegasus to their aid, which then allows Super Sailor Moon to use her Moon Kaleido Scope to vanquish the monsters to return the victims dream back to his/her heart that the monster ate.

Despite how powerful Queen Nehelenia is after being released from her mirror prison after having obtained the Golden Crystal from Pegasus, standing up to even some of the powerful attacks that the Sailor Soldiers can dish out (like Sailor Planet Attack, etc.) Sailor Moon is eventually able to defeat her, with the help of Chibi Moon and all the people of Japan, chanting “Moon Crisis Power” together, which amplifies the brightness and power of the Golden Crystal, allowing them to defeat Queen Nehelenia, to the point where she is no longer able to stay within the Earth’s Universe due to losing her beauty, and is, therefore, returned to her prison mirror where she will remain in loneliness for all eternity, but not without having a beautiful, young appearance.

Overall I thought this season was a great watch, with a very dark and deep storyline, that was on par with the series previous season (Super.)